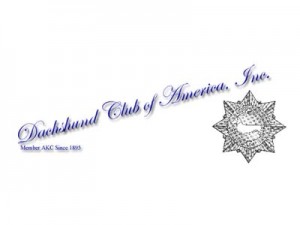 The objects of the Dachshund Club of America are to encourage and promote quality in the purebred breeding of the Dachshund and to do all possible to bring their natural qualities to perfection; to encourage the organization of independent local Dachshund Specialty Clubs in those localities where there are sufficient fanciers of the breed to meet the requirements of the American Kennel Club; to urge members and breeders to accept the standard of the breed as defined by the Dachshund Club of America and approved by the American Kennel Club as the only standard of excellence by which Dachshunds shall be judged; to do all in its power to protect and advance the interests of the breed and to encourage sportsmanlike competition at dog shows, field trials, obedience trials, and earth dog tests; to conduct sanctioned matches and specialty shows, field trials, obedience trials, and earth dog tests under the rules of the American Kennel Club.

Bill and I have been active members of the Dachshund Club of America for over 25 years.
If you want more information regarding our breed’s AKC Parent Club please contact: Susan Buck, (760) 789-0592 E-mail: NUFOREST@AOL.COM

Questions about what we do?

Please call (760) 789-0592 to ask for information about our miniature smooth and miniature longhaired puppies.